At first glance, making a photo book about an event that happened more than 50 years ago, from NASA archive material, appears to be an undertaking that is as unusual as it is anachronistic. Where other graphic designers deal with emojis, glitch effects and 3D renderings, Stuttgart-based Steffen Knöll took on the content and design of the first moon landing - in an oversized and lovingly typographed book project. Reason enough to ask Steffen a few questions about his motivation and the challenges in implementing his idea.

How did you get the idea for this unusual book project?

In 2015, by chance, I came across the entire Apollo photography archive of NASA, which was freshly published at the time. As a print enthusiast, I have tried to get this archive in print. “You should be able to buy that somewhere,” I thought. Unfortunately, this search was unsuccessful. There are of course countless great books about the moon landing such as Full Moon by Michael Light, which shows a selection of the "best" photographs of the Apollo 11 mission and the great report by Jesco von Puttkamer with the title "Columbia hier spricht Adler!". But unfortunately there is no book that shows most of the photographs from the moon landing.

I sat on the data for another three years - torn between how I could map and publish this project. The question of whether the entire archive should be included in a complete compendium remained unanswered for a long time. During my diploma at the Akademie der Bildenden Künste In Stuttgart (ABK), however, this question ultimately became superfluous. I made the decision to publish the book my own way - only as an accompanying object for an exhibition on the same topic, but already bundled between two book covers.

Two attempts and countless hours of work by committed project participants later, the book was published at Spector Books in Leipzig.

It was preceded by the funding competition for young book designers called Discovered. A cooperation between the book institutes of the ABK Stuttgart, the University of Fine Arts Hamburg and the University of Book Art and Graphics Leipzig, which was initiated by Prof. Uli Cluss, Prof. Markus Dreßen, Prof. Ingo Offermanns and Prof. Ludovic Balland and through which the Buch received generous financial and advisory support.

Please explain us the design concept of Apollo 11.

The book Apollo 11 - Man on the Moon - The Visual Archive is an archive compendium that shows all photographs of the Apollo 11 moon landing and those that were taken in advance in the preparatory phase. For this, the book is symbolically divided into two parts: the first part, which is printed in four colors on white paper, shows the events on earth up to the lift-off and one that shows all the photographs in space and on the moon.

In the second part, the images are also slightly alienated from the originals in terms of design and printing. These are recorded in silver on deep black paper. This alienates the all-too-familiar, iconographic recordings and requires the viewer to take a fresh look at these photographs. This gives the pictures and the book a new meaning: a sharpening of the view of what has already been seen without renouncing the fascination of the picture material. In addition, the question of why the book is needed in printed form is answered, since all the pictures are available online. It is not possible to digitally depict silver color. The haptic experience of the images and their alienation through this printing process create new approaches via detours - the fact that the silver is reminiscent of the shimmering moon doesn't detract from the concept.

What is it about space travel in general and the Apollo 11 lunar mission in particular that fascinates you?

Space travel fascinates me above all through what it passively conveys. Of course, all of the technical achievements that we can enjoy through space travel are exciting. But space travel gives you the feeling of awe and the dream that we humans are part of something bigger. Something bigger that we should and can travel and explore. Even if we are just at the beginning of space travel, I share the opinion of Professor Brand (character from Christopher Nolan's film Interstellar; played by Michael Caine) when he says: "We’re not meant to save the world, we are meant to leave it.“ At least the second half, the first part, I see a little differently.

What fascinates me about the moon mission is the fact that people have actually managed to make this dream of mankind, which has been cherished for millennia and which has been treated in countless literary works, come true. A civilian (not a soldier!) Was the first person to set foot on the moon and the entire world population watched it live. Unimaginable - in comprehensibility and in emotional power. There is a photograph taken by pilot Michael Collins. This shows the Lunar Module occupied by Neil Armstrong and Buzz Aldrin and the globe in the background. Michael Collins is the only person in our universe who was not captured in this picture. An infinite feeling of loneliness, but also of awe must have overcome him when he realized this. Incredible and therefore so incredibly fascinating.

Why is it so difficult to make a photo book out of archival material?

First of all, it is quite a laborious undertaking to find out which images can be displayed in a legally unobjectionable manner and for which one may have to obtain the image rights. In the case of the Apollo 11 images, that was a slightly smaller hurdle, since NASA provides the images free of rights, especially for publication projects. But still, a great challenge for the inexperienced editor. In addition to this task, the focus is of course on sensible and error-free reproduction of the photographs. Images should not only be reproduced well in terms of image processing, but should also be correctly set in terms of their structuring logic. This requires intensive research and the comparison of countless sources with the available material. Of course, you also have to work out the added value of a new edition. Making a book for the book's sake is a noble cause, but it certainly isn't that interesting. Precisely here, a contemporary approach and approach to the topic are required.

In the context of Apollo 11 and the associated “conspiracy theories” and the constant emergence of deniers of the factual, such a publication is of course a commitment to documentation and a belief in fact-based science as a tool for exploring the world. In short: Apollo 11 - Man on the Moon - The Visual Archive is the commitment to the factual in a world that, as the photographer and artist Jos Jansen describes in his book “Universe”, has arrived in a “post-truth era” seems to be. (published by The Eriskay Connection).

What challenge did you have to overcome while producing the book?

In addition to the content and design challenges already described, the financing and “making it tasty” at a publisher were of course a major challenge. Also the coordination of all those involved in the project through my business partner Sven Tillack and me, with our two employees Niklas Berlec and Vincent Herbet (big compliments to both of them), the translator Sara Hoss, the editors Mike Pilewski and Hanne Mächler, the printing company Offizin Scheuflen and the publishers inside Anne König, Jan Wenzel, Markus Dreßen as well as my university the ABK Stuttgart represented by Prof. Uli Cluss was a big task. In addition to the daily tasks as a designer, a project like this is mastered in one's free time and is only as successful as the interaction of all project participants.

Do you have a favorite double page in the book?

My favorite page is definitely the very first page in the book. It shows the dedication next to a picture of the moon. The book is dedicated to Margaret Hamilton, Mary Jackson, Katherine Johnson, JoAnn H. Morgan, Dorothy Vaughan and all NASA scientists without whom this book and the moon landing would never have existed. They were just as important as the three astronauts. Without them we might still dream of three trips to this shimmering satellite. In addition, the four women mentioned were pioneers who were not only able to break through the physical limits of the atmosphere, but also the limits of the social conventions that were valid at the time, which were characterized by racism, racial segregation and patriarchy. 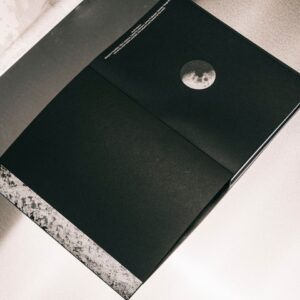 STEFFEN KNÖLL (born 1989) is a communication designer, editor and lecturer at the State Academy of Art and Des in Stuttgart. Together with Sven Tillack, he founded Studio Tillack Knöll in 2018 and has been working concept-oriented at the interface of design, architecture, science and business ever since. He is also involved in the design scene on a voluntary basis, giving lectures and jury activities at design competitions. In his spare time he is a passionate collector of books. 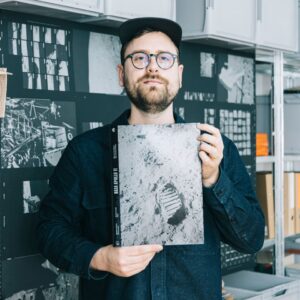 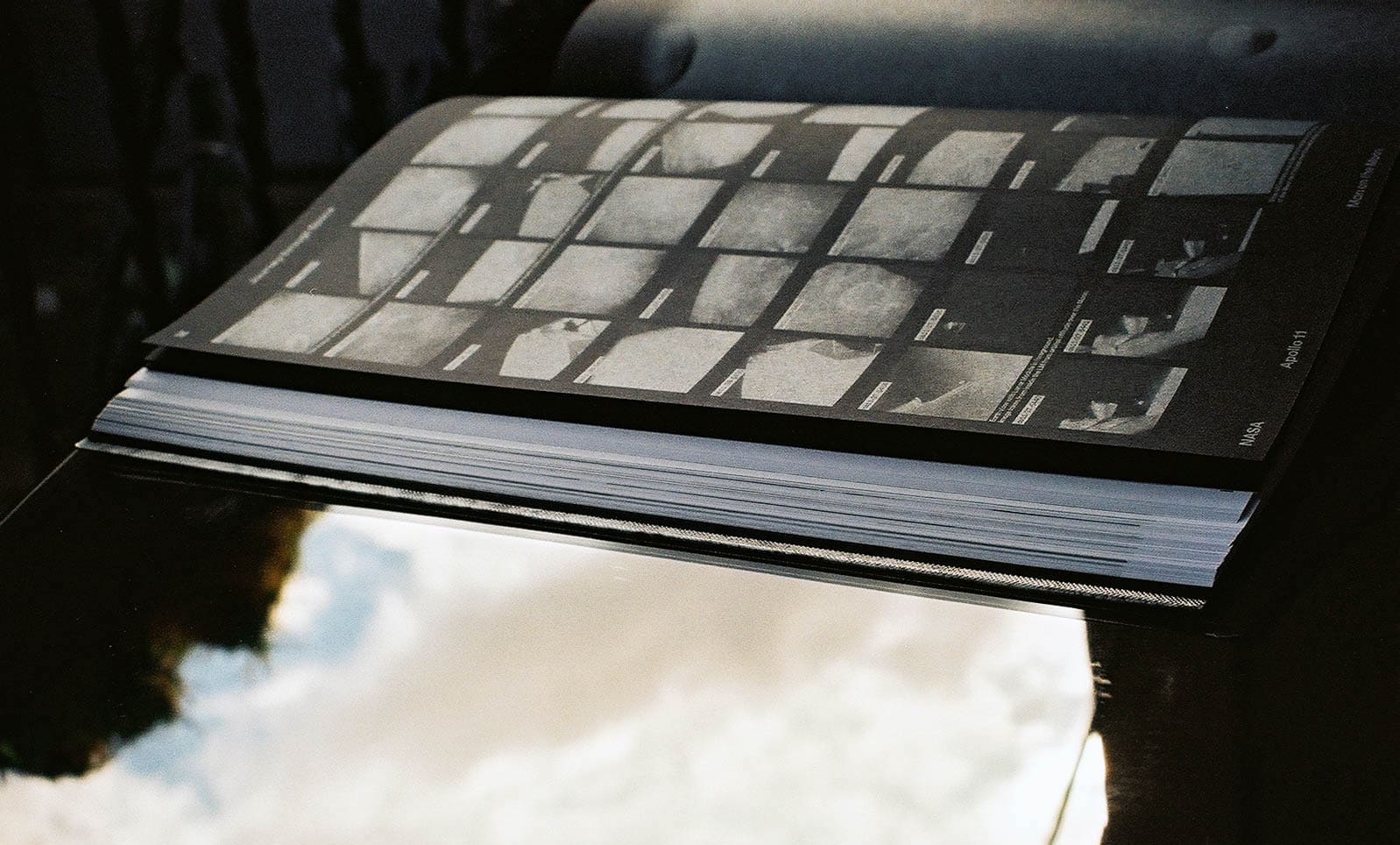 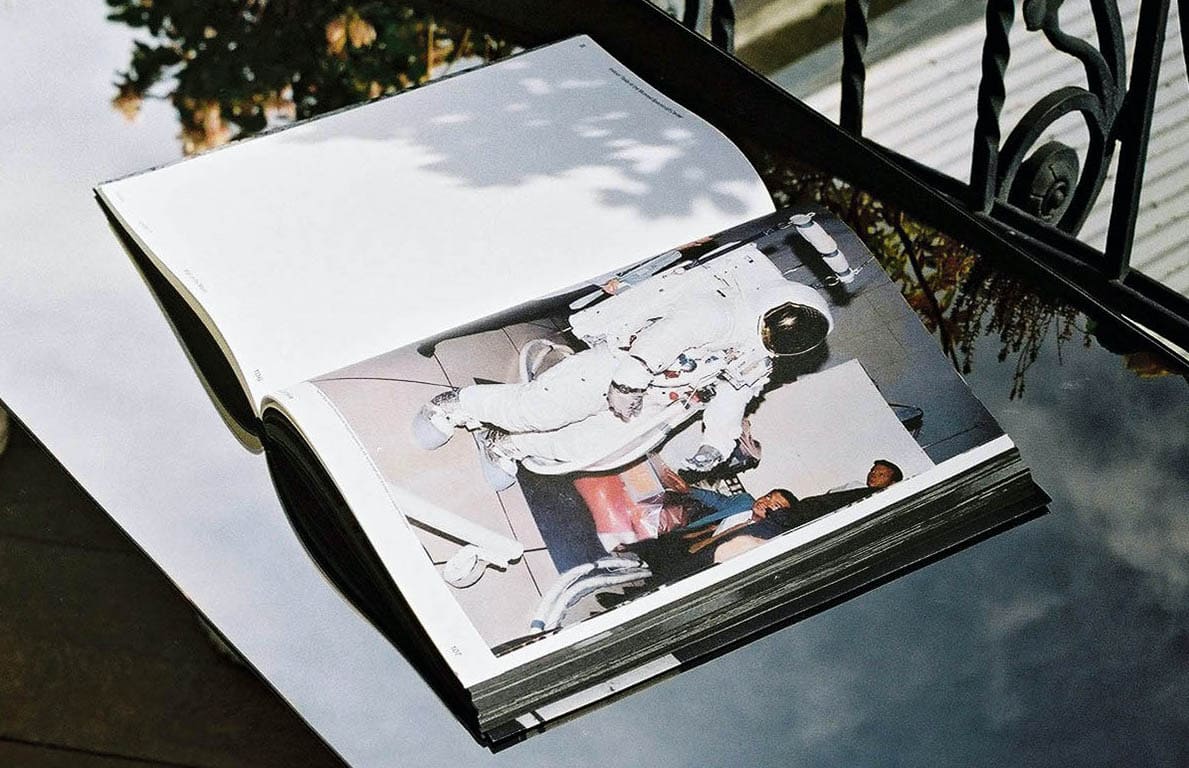 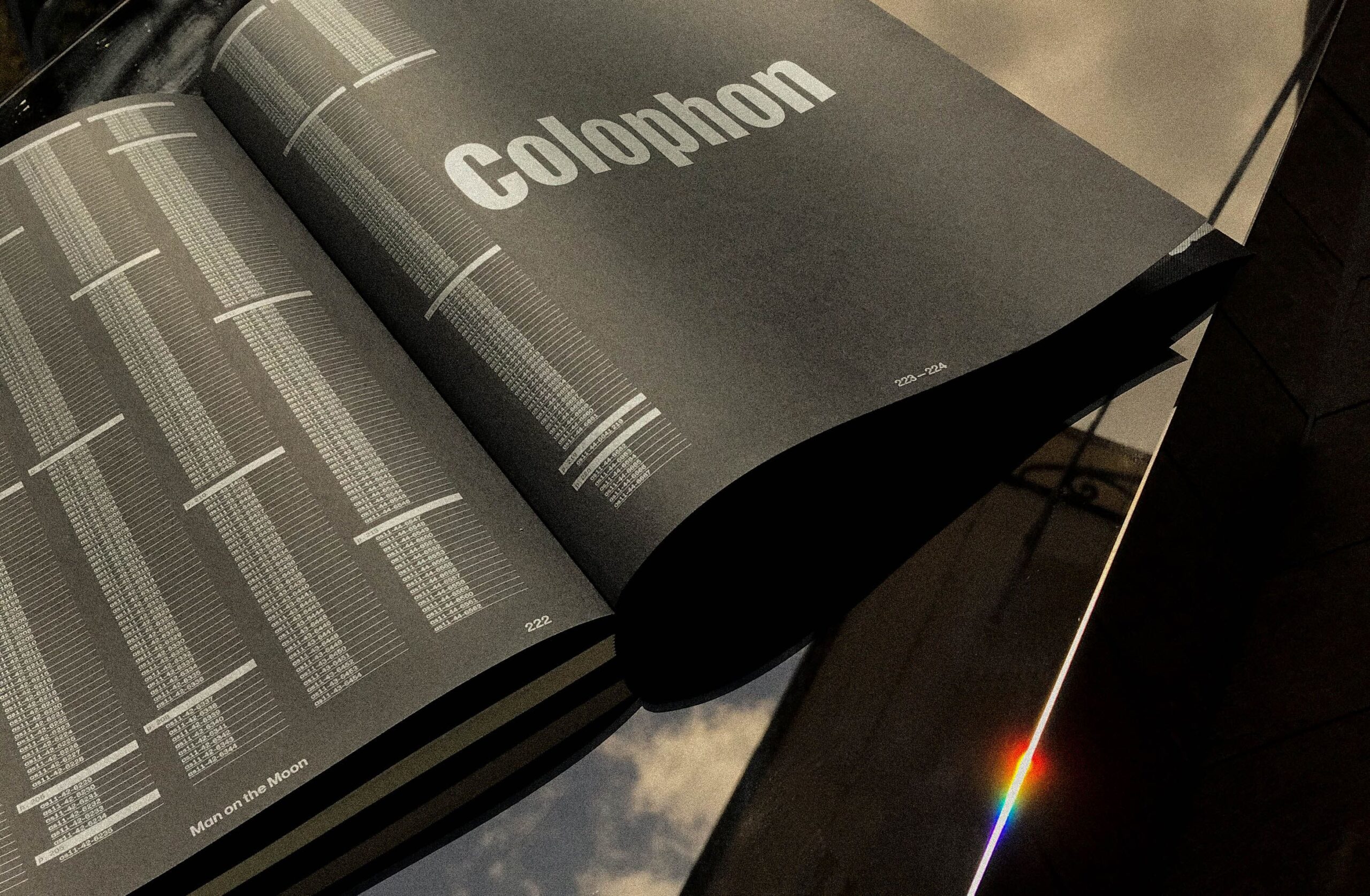 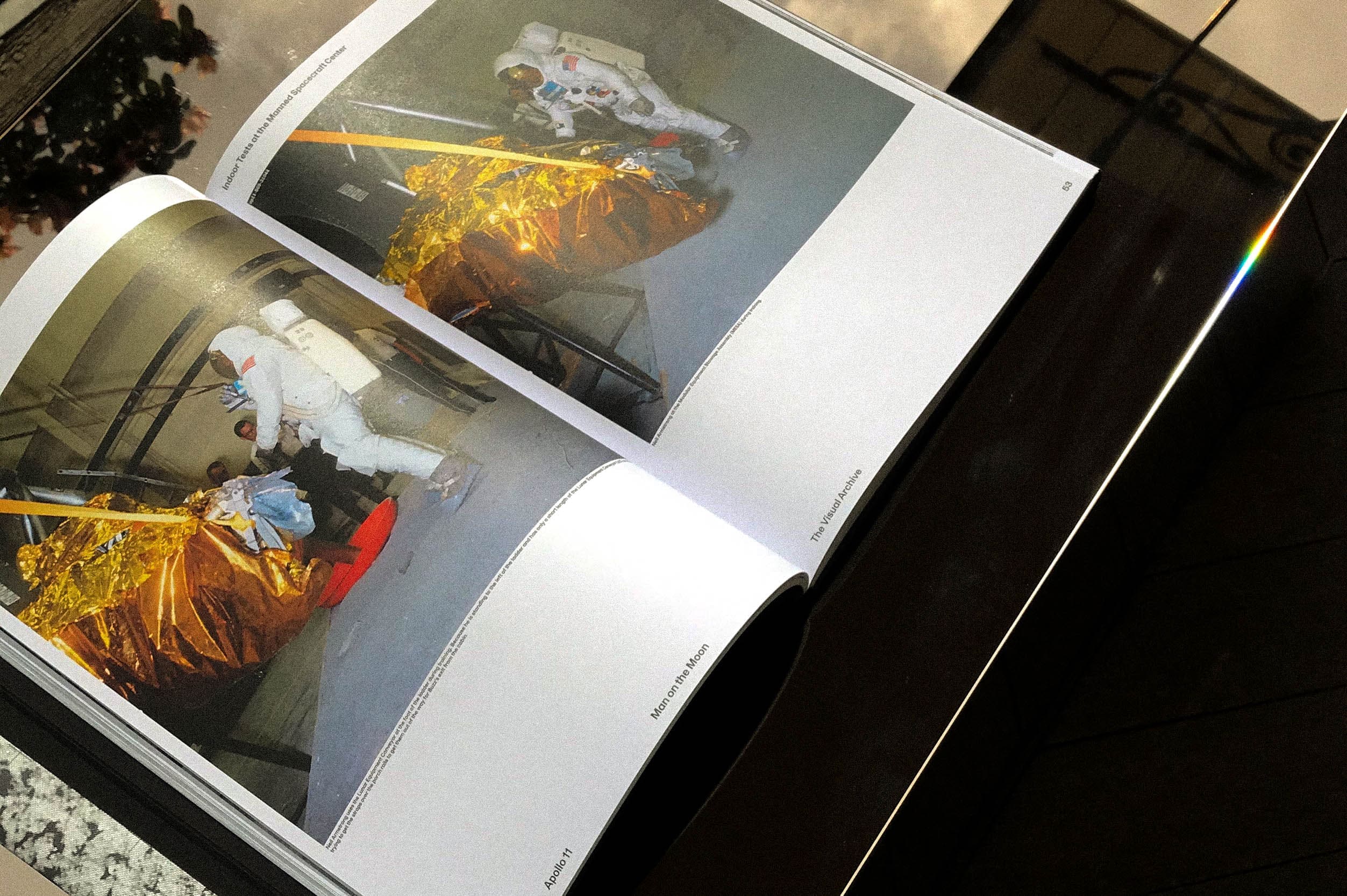 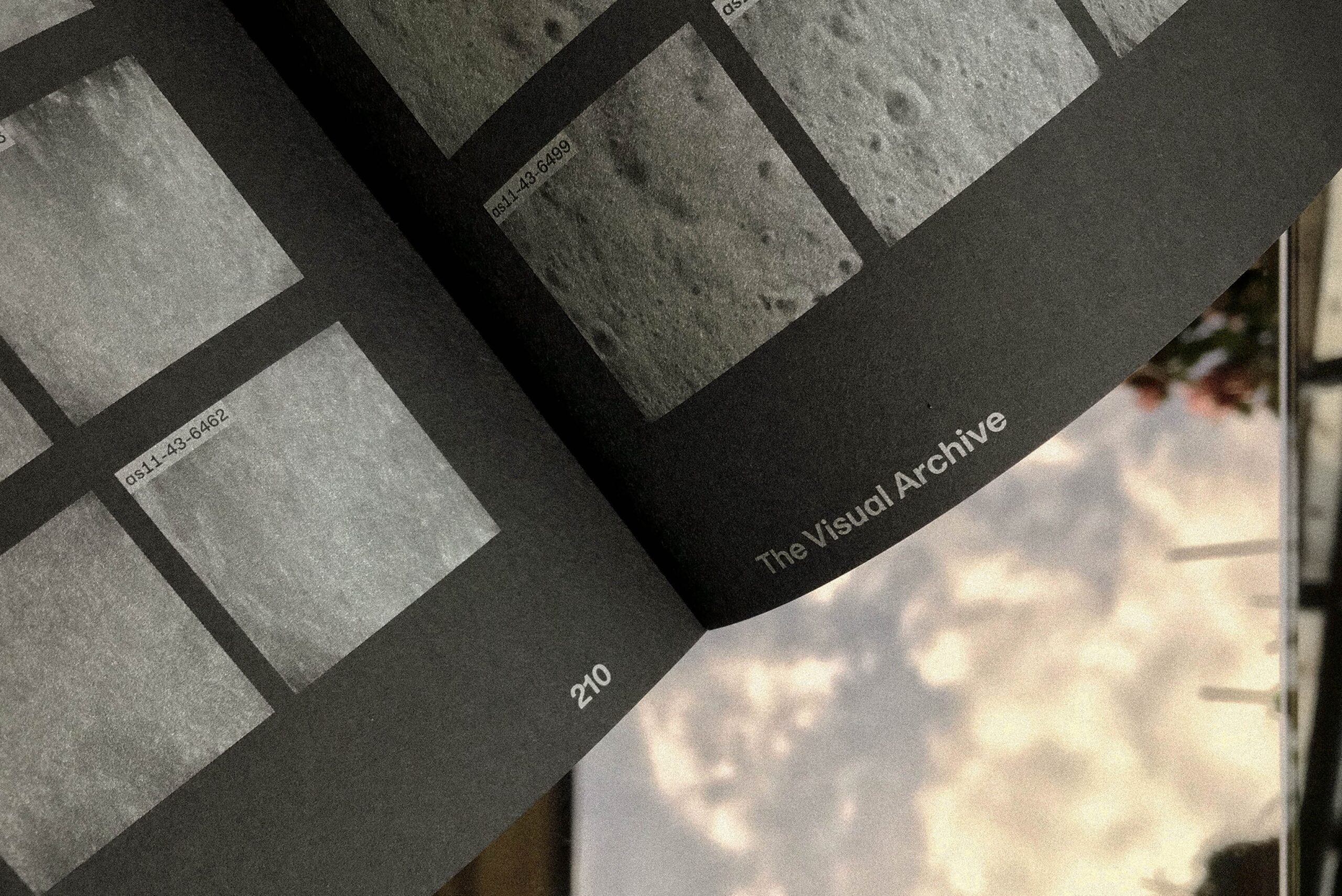